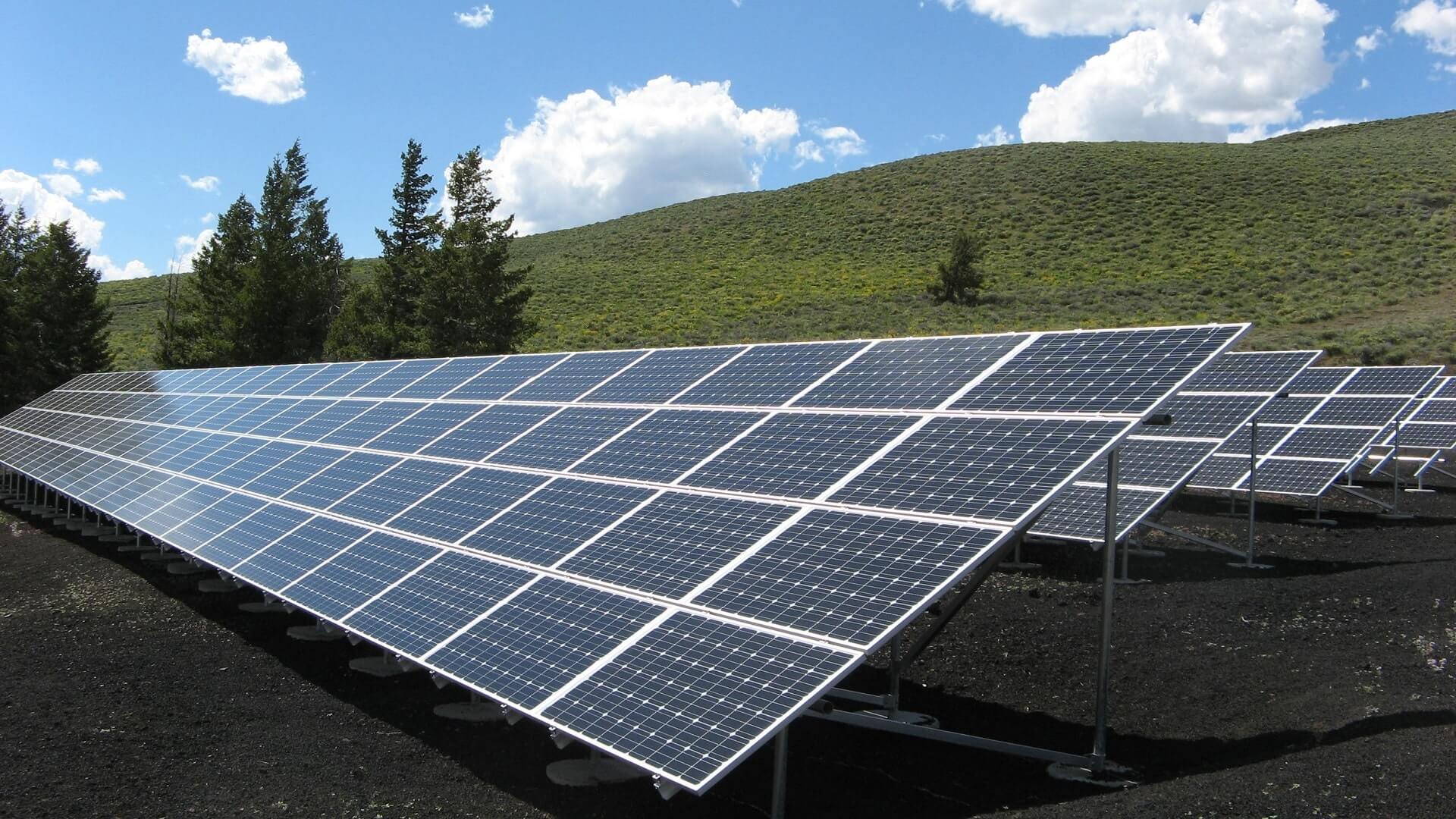 Students will be able to understand how application of photo-electric effect can be helpful to meet the electric energy supply in urban/rural/remote areas. The students are expected to create a game in which they must make an electric grid of solar panels that can produce adequate electric output that can meet the demand of small town with population of 5000 people.

Solar cells work on principle of photo-electric effect. They capture sunlight and convert the sunlight to electric energy.

The work function of the metal is Wo. This metal captures the sunlight and gives off an electron.

The kinetic energy of the photon is given by

Here Vo­ is the electric potential at which photoelectron is ejected.

The energy of the photon is given by,

According to the Einstein’s photo electric equation we have:

This equation gives the voltage output of solar cell.

This current is direct current also known as DC.

Considering a solar cell as an electric cell, if we connect 4 cells in series then their voltage gets added but the current remains the same because the current produced by 1 cell must pass through all the other cells.

Thus, total electric power produced by this configuration is  W.

Disadvantage of series connection of cells is, if one cell damages or stops working due to shade then the entire panel stops working. Hence a diode is connected to each cell in parallel to provide alternate route to current to flow in the circuit without breaking the circuit. It also protects the panel from voltage overloading or current overloading.

When an appliance needs to work on high voltage, then series connection is preferred.

When cells are connected in parallel to each other, their output voltage remains the same, but their current adds up.

The output voltage of this configuration is

And the output current of this configuration is

And electric power produced in this configuration is

Thus, in the parallel connection the current generated by each solar cell gets added while potential remains the same.

When an appliance which needs to draw more current, parallel configuration is preferred.

In case of damage to either one of the cells, the rest cells in this configuration still work and generate the same current. Only their current output gets reduced.

To maximise current output at certain voltage, an array is formed.

Consider the following example, here 8 cells are arranged in an array. 2 rows of 4 cells connected in series. These rows are connected in parallel.

The total voltage output of each row is 2 V. And as these rows are connected in parallel hence the output voltage of the array configuration is 2 V.

Thus, total power output obtained in this array configuration is

Thus, power and current both are maximised by array formation.

A Solar panel consist of 36 such cells which are connected in series with each other.

And maximum total current output of the solar panel is 35 mA in 1 second.

a) Off grid: This is generally practiced in the remote areas or small villages where electric distribution by electric power plant is difficult. In order to meet the demands of electricity an off grid solar power plant is setup in an open non-agricultural area.

Depending on the demand of electricity, the array of solar panel is created. The electricity produced by the power plant is stored in battery bank which can supply the output voltage of 240 V.  These batteries are connected to a device that changes the direct current to alternating current at 240 V and 50 Hz cycle and then the power is distributed to the grid.

Disadvantage of off grid power plants:

Advantages of such power plants are

There are incentives received to the grid owners from the conventional power plants and their electricity bills are very minimum.

Advantages of such solar power plant is

Disadvantages of such solar power plants are:

are created where electricity generated by array of solar panels is stored in battery bank and it is also sold to the conventional power plants.

The incentive structure remains the same as that observed in on grid power plant.

Advantages of such power plant are

In the game, you can have access to solar grids that need to be installed. Upon successfully installing a solar grid, you are rewarded with more solar grids that you can install in other villages. While installing the grid, you need to take into account several factors like placement, location etc. You will have to choose the land such that; you must avoid deforestation or cutting of trees.

Next, you are also able to see how many villages are powered through the thermal power plant. You have to identify 1 village and start installing the grid.

Once you decide the village, you will have to install the solar grid in a manner that sunlight hits the area properly and also ensure that there is no tree cutting or deforestation. If deforestation exceeds a certain value, game will end. If the solar grid is not installed properly (for example: if it is installed in a place where ample sunlight is not there, the grid will fail) and again there is a possibility of game ending.

Once first village installation is done, you will receive more solar panels and grid equipment to install in other grids.

Once all steps are completed for all the villages, the game will be successful. Step 3 is applicable for every installation. Hence it is important to chose the location for the grid carefully and also ensure that there is no deforestation and you choose a flat land for installing the grid.

Q1. Which of the following is a renewable resource?

Q3. What are the advantages of on grid solar grid?

Q4. If you are a consumer, which grid you will opt for and for what reasons?